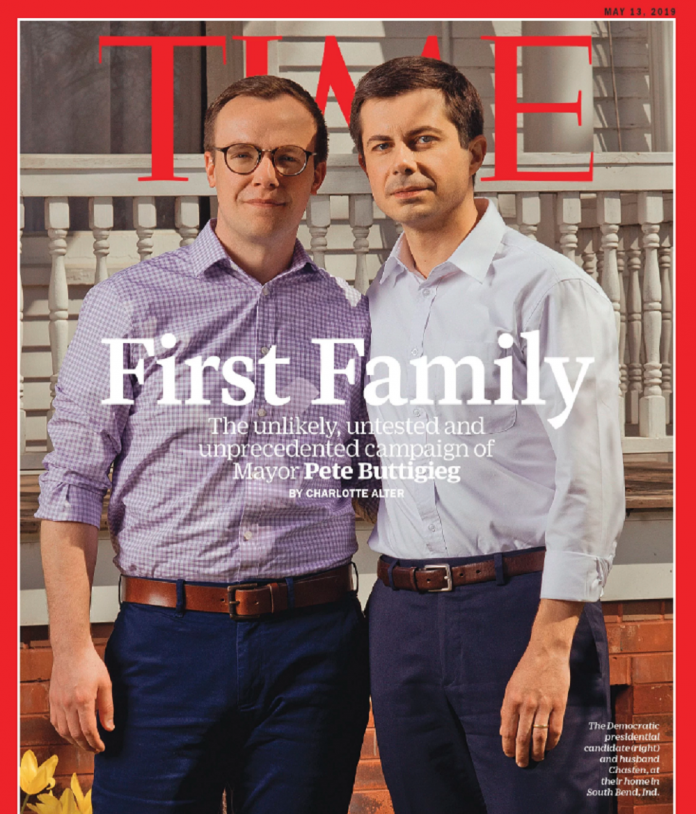 the nation’s would-be first first gentleman is worried about the politics of hoarding cheese and sniffing deodorant. That’s not all he’s worried about, of course, but he’s not shy about sharing the weird side of campaign fame. Chasten’s humor and openness have been his defining features since the national spotlight found him and “Mayor Pete” earlier this year. It has made him a force on Twitter, where he has more than 300,000 followers, and a not-so-secret weapon for his candidate husband, a former Naval intelligence officer and management consultant who has more fluency with foreign languages than pop-culture quips.

That’s a helpful skill for the spouse of somebody running for president. It’s also a useful mask for a teenager running from any number of things. At Traverse City West Senior High School in Michigan, Bach knew Chasten as a hilarious, dedicated student. What she didn’t know is why he hung around so much; that her classroom was a refuge for a kid who didn’t feel like he belonged anywhere else.

Chasten stands out among the 2020 spouses for reasons other than the fact that he is a man married to a man, or that he is a millennial married to a millennial, or that this campaign is happening during the first year of their marriage, or that he’s not yet 30. He’s also the son of working-class Midwesterners, a first-generation college graduate, a guy who took a second job at Starbucks so he could have health care. The life story he tells includes bullying, estrangement, homelessness and sexual assault.

His story represents both an American archetype and a modern phenomenon. And now that Chasten Buttigieg knows he’s being watched, what he cares about is being seen.

Chasten knew he was different from a young age, just wasn’t sure why.

His father, Terry Glezman, had grown up poor, so poor that in high school he’d worn his letterman’s jacket every day to hide his unwashed clothes. Sherri Pelon fell for him anyway, and they married right out of high school. She was 22 when Chasten, her third son, was born.

For most of his childhood, the Glezmans made a living and not much more. Sherri worked as a nursing assistant. Terry started a landscaping business. There was mowing in the summer, snow plowing in the winter. They raised cows and set up a Christmas tree stand each December. Every member of the family was expected to help.

The older boys, Rhyan and Dustin, were athletes and hunters. While they were out chopping wood with their dad, Chasten says, “I would be inside reading Harry Potter or singing Celine Dion at the top of my lungs while my mom and I were dusting the cabinets.”

Adolescence started to bring some of those differences into focus. On paper Chasten was another kid on the bowling team, and the 4-H club, involved in every theater production. Internally, he was “scratching and itching and clawing to try to change whatever brain chemistry was making me the way I was.”

He was starting to realize he was attracted to men. He didn’t tell anyone – out of a class of 500 at his public high school, he says, there were zero students who openly identified as LGBTQ – but people suspected. He still remembers being bullied, called homophobic slurs, getting flung around by his backpack. He applied to an exchange program and escaped to Germany for his senior year. “The further away I could get,” he says, “the safer I felt.”

Eventually he felt safe enough to confess his inner thoughts to other kids in the exchange program. “Those people in turn said, ‘Oh, you’re gay,'” he says. It was terrifying and liberating and by the time he returned to Traverse City, it was his truth.

It wasn’t an easy truth for some people to accept. When Chasten came out the summer after graduation, some of his Traverse City friends told him they loved him, and it didn’t matter. But others said they loved him and that it did matter. He remembers one friend invoking God and urging him to change his mind – “Like it was a choice,” he says, “this thing I had decided to do.”

Chasten told his family last. Scared he wouldn’t keep his nerve to say the words out loud, he sat his parents down in the living room and passed them a letter. “I remember my mom crying,” he says, “and the first thing she asked me was if I was sick. I think she meant, like, did I have AIDS?”