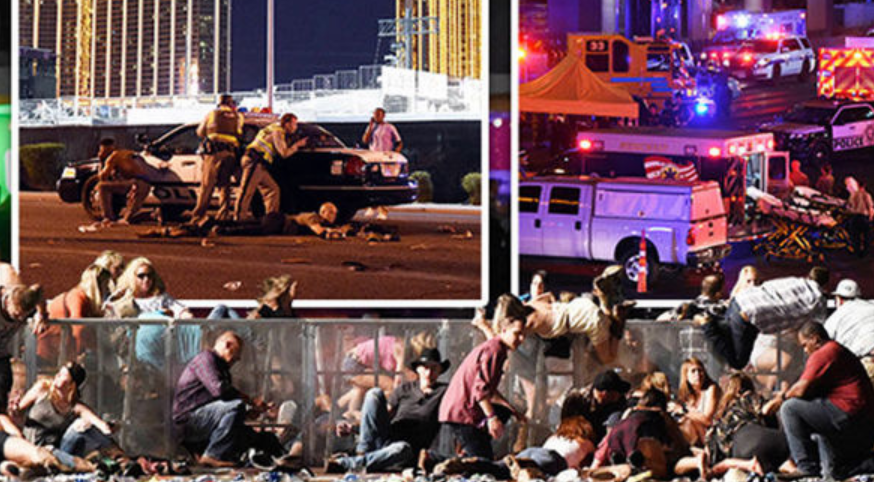 The 64-year-old gunman, named as local resident Stephen Paddock, fired on a Las Vegas country music festival on Sunday from the Mandalay Bay casino and hotel overlooking the world famous Strip, raining down bullets from a 32nd-floor window for several minutes before killing himself.

Some 22,000 people were in the crowd when Paddock opened fire, sparking a panic in which some people trampled on others in their desperate bid to escape as law enforcement officers scrambled to locate the gunman.

Images and footage from the scene showed as shocked concertgoers, some with blood on their clothing, wandered the streets afterwards.

Las Vegas Mayor Carolyn Goodman said of the gunman: “This is a crazed lunatic full of hate. What we ask for is blood now.”

The first victim has been named as Sonny Melton, who was at the Route 91 Harvest festival with his wife.

According to his Facebook page, Mr Melton was from Big Sandy, West Tennessee, and was a registered nurse at Jackson-Madison County General Hospital.

“Sonny was the most kind-hearted, loving man I have ever met. He saved my life and lost his.”

A secon victim has been named as Jordan McIldoon, 23, of Maple Ridge. His parents, Al and Angela McIldoon, confirmed their son’s death.

They said he was attending the Route 91 Harvest Music Festival with his girlfriend, and they were supposed to return Monday night.

The shocking loss of life makes this gun rampage is the worst mass shooting in US history, eclipsing last year’s massacre of 49 people at an Orlando night club by a gunman who pledged allegiance to Islamic State militants.

Islamic State have now also reportedly claimed Sunday’s deadly attack, and said the attacker had converted to Islam a few months ago.

Amaq news agency said: “The Las Vegas attack was carried out by a soldier of the Islamic State and he carried it out in response to calls to target states of the coalition.”

Two senior US officials said on Monday that there was no evidence that the shooter was tied to any international militant group and one said there was reason to believe that the attacker had a history of psychological problems.

The FBI later said in a statement they believed the gunman had “no connection” to any intrnational terror group.

Police added they had no information about Paddock’s motive, that he had no criminal record and was not believed to be connected to any militant group.

It was initially thought Paddock had been working with an accomplice named as Marilou Danley, a 62-year-old Australian woman who was identified as Paddock’s room-mate.

But police later said she was out of the country at the time of the attack and cleared her of any involvement, claiming she was initially linked to the investigation because he had been using her ID since checking into the Mandalay Bay on September 28.