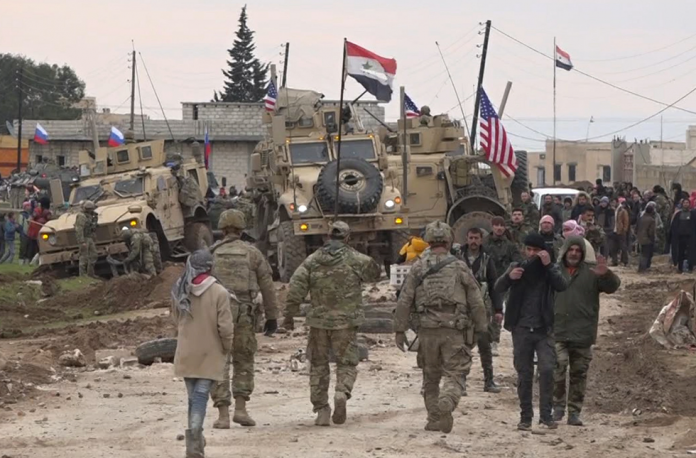 A Syrian was killed and another was wounded when government supporters attacked American troops and tried to block their way as their convoy drove through an army checkpoint in northeastern Syria, prompting a rare clash, state media and activists reported.

The US military said its force came under fire, and that troops responded in self-defense. It said an investigation of the incident was underway. Syrian state-run media said the man killed was a civilian and that he was among residents of a village east of the town of Qamishli who had gathered at the checkpoint and pelted the US convoy with stones. A video posted on state news agency SANA’s website showed angry men firing small arms at a convoy of several armored US vehicles flying the US flag. Some residents pelted the convoy with stones, while another dumped a bucket full of dirt on the back of one vehicle.

In one of the worst incidents of violence against US troops deployed in northeastern Syria, a small fire appears to ignite on an armored vehicle, apparently from fire bombs lobbed at the convoy. US soldiers were seen standing in the middle of the melee, trying to disperse the crowd.

Other videos showed another vehicle stuck in the dirt, apparently having veered into a ditch, while another had a flat tire. In one video, a resident walked up to US soldiers at one of the vehicles, holding a US flag, screaming: “What do you want from our country? What is your business here?” A soldier tells the shouting man to “back off.”

At that point, American troops fired live ammunition and smoke bombs at the residents, the reports said.

A US military spokesman said coalition forces conducting a patrol near Qamishli encountered a checkpoint occupied by pro-Syrian government forces who ignored a series of warnings by coalition troops to de-escalate the situation. The patrol came under small-arms fire from unknown individuals, coalition spokesman Myles Caggins said, adding that coalition troops returned fire in self-defense.

“The situation was de-escalated and is under investigation,” he said in a statement. Air Force Lt. Col. Carla Gleason, traveling with the US defense secretary in Brussels, said no Americans were killed in the incident.

Asked about the incident, US Secretary of Defense Mark Esper said in Brussels he was told there was an “altercation,” without providing details.

“As far as I know today’s incident did not involve the Russians,” he said.

In other violence in the country’s northwest, Syrian President Bashar Assad’s forces continued their advance in Idlib and Aleppo provinces near the border with Turkey. They took full control of a strategic highway that runs through the rebel-held territory and links the capital to northern Syria. The M5 highway had been under opposition control for most of the war.

Those who play with fire will get burned:China warns US-Israel hits Hamas targets in...