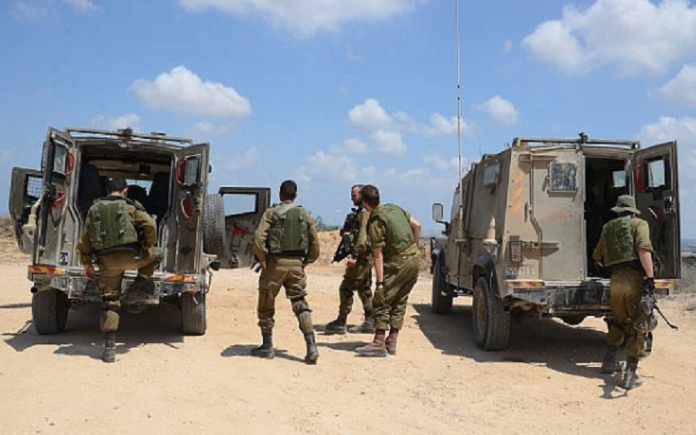 Defense Minister Avigdor Liberman on Thursday said the Israel Defense Forces was on high alert on the Gaza border, following weeks of nightly riots along the security fence.

“Defense Minister Avigdor Liberman held an assessment session this afternoon on the situation in the Gaza Strip, together with the chief of staff, head of military intelligence, Coordinator of Government Activities in the Territories (COGAT), and other security officials,” a statement from his office said. Liberman instructed the IDF to maintain “maximum preparedness for any scenario,” according to his office. Earlier in the day, the army announced it had decided to deploy additional troops to the Gaza Strip area.

“It was decided to send large numbers of reinforcements in the coming days to the Southern Command and to continue the determined policy of thwarting terror attacks and preventing infiltrations into Israel from the Gaza Strip security fence,” the army said in a statement.

The army also set up additional Iron Dome air defense batteries in southern Israel as part of the move.

Border riots, dubbed the “Great March of Return,” have increased dramatically in recent weeks. These began as weekly events from late March through the summer, but appeared to slow as the Gaza-ruling Hamas terror group entered indirect talks with Israel aimed at a ceasefire.

When those talks stalled, Hamas increased the pace of rioting and demonstrations against Israel, and created new units tasked with sustaining tensions along the border fence including during nighttime and early morning hours.

These nightly riots, in which Palestinians regularly throw grenades and improvised explosives at IDF troops, as well as ongoing airborne arson attacks using balloons carrying incendiary devices, have threatened to spark a new large-scale clash between Hamas and the IDF in Gaza.

“The IDF is prepared and ready for a variety of scenarios and sees the Hamas terror group as responsible for everything that happens in the Gaza Strip and that emanates from it,” the army said.

Meanwhile the Eshkol regional council said in a letter to residents: “Every day and night we are exposed to explosions and incendiary balloons that continue to be launched into our area and to the thick, acrid smoke from the tire fires next to the border.

“In our conversations with political and military figures, we ask them to put an end to the riots and the incidents near our communities, and we support the IDF in all actions needed to do so.”

In an interview with the Yedioth Ahronoth daily published Thursday, the leader of the Hamas terror group in Gaza, Yahya Sinwar, said he didn’t want any more wars but said an “eruption is inevitable” given the current humanitarian conditions in the Strip — conditions that Israel and some others in the world blame explicitly on Hamas’s poor governance of the coastal enclave.

Both Israel and Egypt enforce a number of restrictions on the movement of people and goods into and out of Gaza. Israel says the blockade is necessary to keep Hamas and other terror groups in the Strip from arming or building military infrastructure.