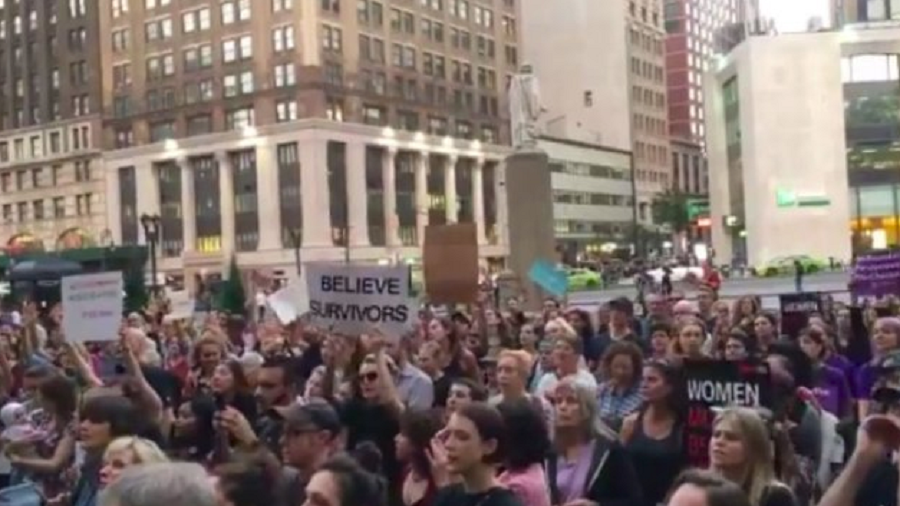 The vigils, attended by thousands nationwide, began early Wednesday evening in states including California, Alaska, Arizona and more. Hundreds of people gathered for a vigil in front of the Supreme Court in Washington, D.C.

“Kavanaugh has shown that he is hostile to women,” wrote MoveOn, one of the groups behind the vigils, on the event page. “From his record against women’s health and autonomy to his record against workplace protections to the sexual assault allegations against him to the anger he displayed to female U.S. senators.”

“Now is the time for all of us to come together and tell our senators to believe women and stop Kavanaugh this week—and to show the country that women, and all of us, will hold Republicans accountable on November 6,” the event page reads.

Demonstrators at the Supreme Court vigil called on senators to reject Kavanaugh’s nomination, not only because of the multiple sexual misconduct allegations against him, but also because of his judicial record on abortion and immigration rights.

Protesters throughout the night broke into chants of “vote him down!” and “believe survivors!” as activists associated with causes including disability and immigrant rights gave impassioned speeches.

Speakers directed their ire toward the senators who remain swing votes in the battle over Kavanaugh’s nomination, calling on them to vote “no” or face repercussions at the ballot box in November’s midterm elections and in those after.

Women’s and progressive groups have been staging demonstrations across the country since Christine Blasey Ford went public with her allegation that Kavanaugh assaulted her during a high school party in 1982.

The groups have rallied around Ford, as well as Deborah Ramirez, who publicly accused Kavanaugh of exposing himself to her during a Yale University gathering in the 1980s, and Julie Swetnick, who has alleged Kavanaugh harassed and groped girls in high school. Kavanaugh has denied all allegations against him.