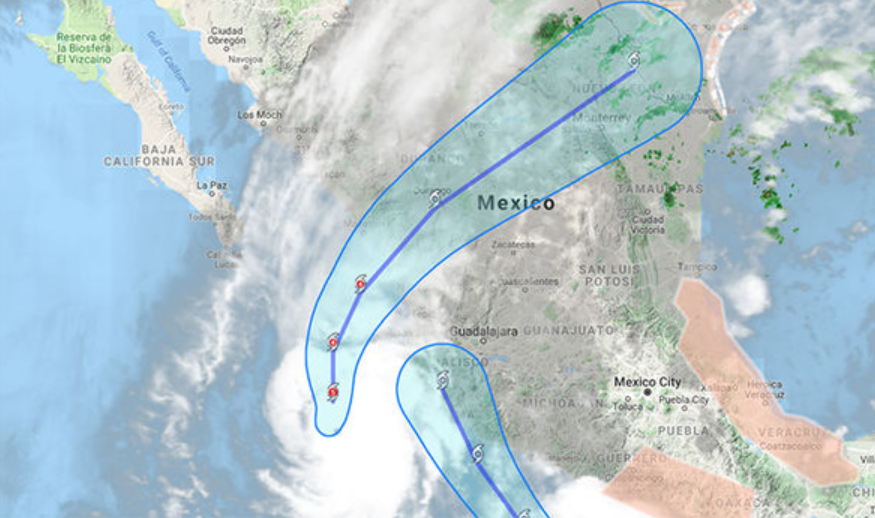 Hurricane Willa is barreling towards Mexico and is primed to wreak devastation when it makes landfall with up to 18 inches of rainfall and winds of more than 150 mph.

The Category 4 storm’s 155mph winds are just 2mph under being classed as a Category 5 storm – the scale’s highest classification.

Willa is forecast to accelerate towards the north-northeast tomorrow and move over or very near the Mexican islands of Islas Marias. The storm is expected to reach the southwestern coast of mainland Mexico in the hurricane warning area Tuesday night or Wednesday morning.

Intense torrential rainfall is forecast to hit Mexico, with a staggering 18 inches expected to fall across portions of western Jalisco, western Nayarit, and southern Sinaloa.

This amount of rain could trigger life-threatening flash flooding and landslides.

In its latest update at 3.00am local time (10.00am BST), the National Hurricane Center (NHC) describe Willa as an “extremely dangerous hurricane”.

Willa is “expected to produce life-threatening storm surge, wind and rainfall over portions of west-central and southwestern Mexico”.

The current path for Hurricane Willa sees the storm system tracking slowly northward at a speed of 7mph.

Elsewhere, up to six inches of rain is forecast across portions of Zacateca, Durango, southeast Chihuahua, and Coahuila in Mexico.

Residents have been told to expect flooding and potential landslides.

Hurricane force winds are forecast to hit San Blas to Mazatlan, including Las Islas Marias where hurricane warnings are in place.