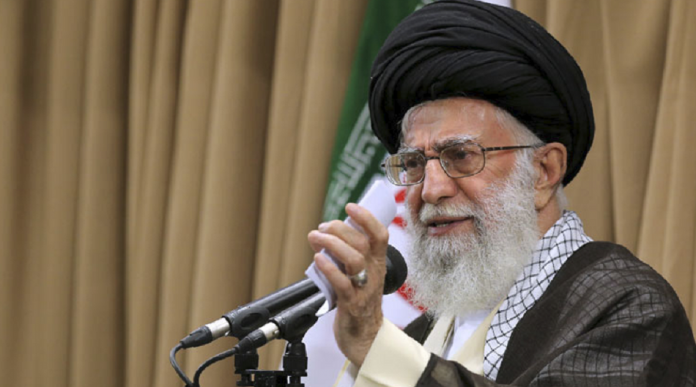 In a speech in Tehran to thousands of members of the Basij, an all-volunteer force under Iran’s paramilitary Revolutionary Guard, Khamenei asserted that the country’s economy was strong enough to withstand the punitive measures.

“Following vast explorations, the enemy has arrived at sanctions [as a solution] to counter the Islamic Republic. It has no other solution but economic sanctions. Other paths in front of it are blocked,” Khamenei said according to state-run Press TV. “Our national economy can defeat sanctions,” he said. “The defeat of sanctions will be America’s defeat, and the US, with this defeat, should once again be slapped in the face by the Iranian nation, God willing.”
Khamenei also warned that media controlled by foreign enemies could be as dangerous as “chemical weapons,” and said he would never allow Iran to “kneel and give in to the US.”

Qassem Soleimani, the leader of the Guard’s expeditionary Quds Force, attended the speech with the head of the Guard, Gen. Mohammad Ali Jafari.

Trump placed a first round of sanctions on Iran in August after pulling out in May from the 2015 international deal aimed at curbing Tehran’s nuclear ambitions, to the dismay of his European allies. A second, more sweeping, set of sanctions is set to be reimposed in early November.