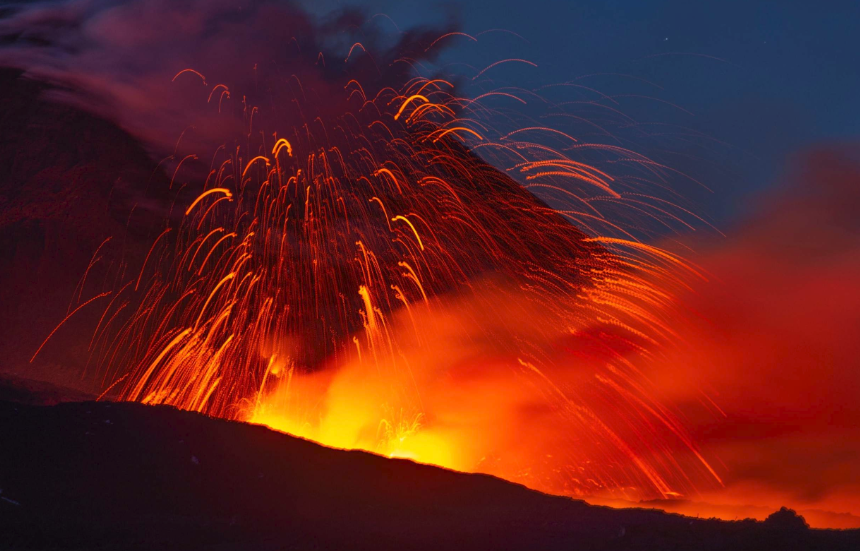 Two fractures opened at the base of the South-East crater and on the north-eastern flank of the New South-East crater at about 3am local time (2am BST). The lava flows were accompanied by a Strombolian activity from the main craters. However nearby Catania airport remains open.

Eugenio Privitera, director of Catania National Institute of Geophysics and Volcanology (INGV) said: “We are starting a new eruptive phase of Etna which could end soon or last months.

“The phenomena are all confined to the summit area of the volcano and do not constitute a danger to inhabited centres and people, but the flow of tourists in the area must be controlled for their safety”. Volcanic ash was pictured rising up to two and a half miles above sea level.

Volcanologist Boris Behncke told geological news website The Watchers that the fact that new eruption has started at Etna did not necessarily mean there will be new earthquakes like the region experienced in December.

He added: “Most eruptions on the sides of Etna are preceded by modest seismic activity, but this time they haven’t

“In some cases, the earthquakes continue even after the beginning of the eruption (as in 2002 and December 2018).”

The EU’s Adam Platform earth observation satellite tweeted spectacular satellite imagery showing the eruption from above, adding: “Etna speaks, Etna’s Peak! The eruption of the Europe’s most active volcano, in Sicily, Italy, yesterday (May, 30) as seen by #Sentinel2 in a 3D rendering via @PlatformAdam from two different point of view!”

Etna, which rises to almost 11,000 feet, is located in the east coast of Sicily, in the Metropolitan City of Catania, between the cities of Messina and Catania.

An eruption between 1991 and 1993 saw the town of Zafferana threatened by a lava flow.

However, successful diversion efforts meant just one building a few hundred metres from the town’s margin was lost.

On March 11, 1669, an eruption at Etna resulted in 600 million square metres of lava being expelled, generating a lava field more than 10 miles in length.