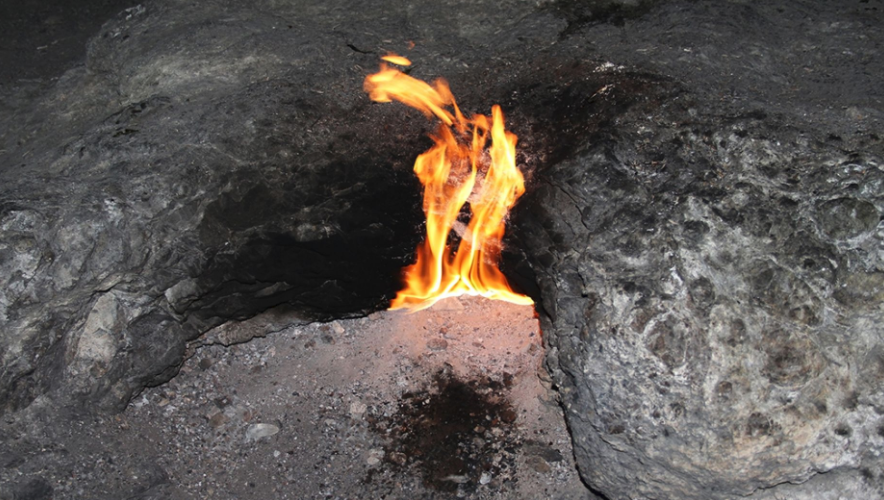 For 40 minutes, a small hole in the ground sprayed 12-foot flames uncontrollably before finally coming to a halt. Images of the red-orange flames and heat from the fire were embedded in the minds of those who witnessed the scene.

The hole opened up on a private property in Midway, Arkansas, nearly a month ago — on Sept. 17 — and yet it is still stumping investigators. People were quick to offer theories as to what caused the sudden explosion: Was it space junk, meteorites, maybe a gas leak? So far, none of the guesses have proved to be correct, Baxter County Judge Mickey Pendergrass told the Arkansas Democrat-Gazette. He also ruled out another wild explanation — Satan.

“As far as the spiritual Satan goes, we’ve ruled that out. … He didn’t come up and stick his pitchfork in the ground and blow that hole out,” Pendergrass joked.

“It was drawing air from a lower elevation. … Whatever it was, it burned up its fuel and went out,” he told the newspaper.

The hole didn’t just open up suddenly. It has been around for at least 10 years, according to a landscaper.

“It’s kind of like an old groundhog hole, burrow, or armadillo’s,” Pendergrass described. “But it’s been there a long time.”

Geologists scoped the hole with a camera and determined it was likely created by an animal because it extended horizontally before intercepting a nearby drainage ditch, according to an Arkansas Geological Survey report.

Gas company Black Hills Energy, which was asked to help inspect the site, confirmed it didn’t find any utility or fuel lines leaking in the area.

The Arkansas Department of Environmental Quality also examined several underground fuel storage tanks in Midway to ensure they were sealed.

“Based on ADEQ inspections it does not appear that any of these tanks contributed to the fire,” the agency said in a statement to the Arkansas Democrat-Gazette.