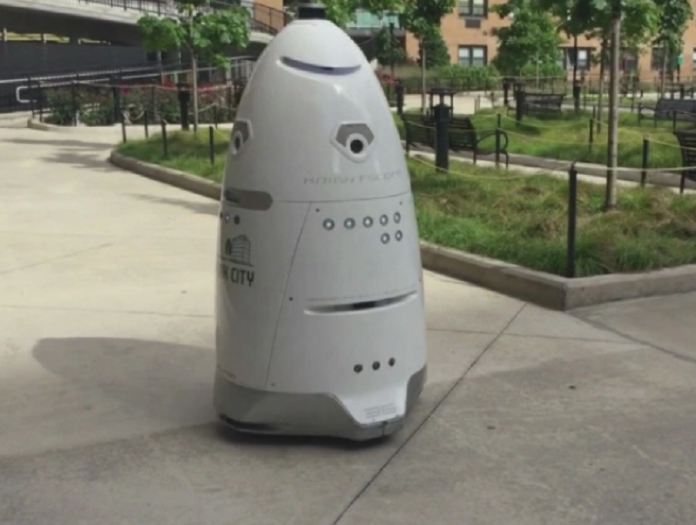 The security force of the future is already patrolling several neighborhoods in the Tri-State Area.

The robotic protectors can see what you’re doing and even talk back to you, but the machines created by a New Yorker have prompted serious privacy concerns, CBS2’s Clark Fouraker reported Tuesday. “This is a crazy combination of artificial intelligence, self-driving autonomous technology, robotics, and analytics in something that’s actually useful for society,” said Knightscope CEO William Santana Li.

Li’s company has built three robot models in the United States, and is introducing them to customers inside a new showroom at 47th Street and Lexington Avenue in Manhattan.

Each robot has five cameras, four of which help the robot see things. The other is used to get thermal imaging data. All of the information gathered goes to an internet-based portal that helps local security forces on the ground.

The robots are able to observe people walking on the sidewalks, record license plate numbers, detect the heat in objects, and see which cellphone serial numbers are within a designated patrolling area.

Knightscope said the data is secured and is only seen by the security agency controlling the robot. They’re able to stop it and tell it what to look for, but it doesn’t have a joystick that would allow it to follow or target a specific person.

“In the wrong hands, people could like… reboot it or something,” said Far Rockaway resident Jose Rodriguez.

Li grew up in Queens and said the 9/11 attacks began his thinking about how to improve security across the country.

“I’m really still upset about it, so I’m dedicating our lives to improving the safety of our country,” he said.

The company said it costs between $6 and $12 an hour for a new robot to hit the streets. They’re currently deployed in 16 states to come alongside local security teams to help reduce crime.